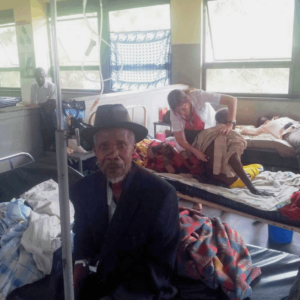 It’s been six months since we arrived in Uganda. Time flies… After getting to know the wards in the hospital, we started conducting regular doctor rounds and we feel that we are making a significant difference. We are examining the patients (a surprising new concept in Kiboga), following up, running around the hospital to arrange for different tests (the lab filed a complaint due to the increased work load), bringing in other doctors for consultations, or consulting by phone/WhatsApp. We deal with quite a few frustrating cases, when we have no way of helping patients, or we fail to get a much needed test or medicine. Many of our patients, adults and children, die from conditions that could have been managed relatively easily in Israel. We run the wards on our own, and many times feel we are in deep over our heads. On the other hand, we also have many success stories. Complicated cases that we managed to diagnose against all odds as well as patients who arrived in bad condition, improved greatly with treatment, and returned home in good condition.

Meanwhile, we also started looking for volunteer doctors who will replace us after we leave. Back at Kiboga, we are working on our social contacts and hosting Israeli style dinner parties (we must say that not all the guests deal well with the menu). Eyal continues to hang out and wander around Kiboga with his friends. Still not big at talking, but he understands a whole lot and also invents words and customs of his own (like pointing at every pile of cow shit and loudly declaring ‘Nana!’). 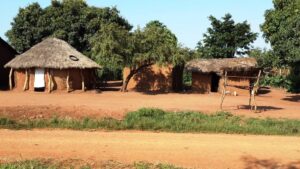 Apparently when duty calls, our car can also function as a 4-wheel drive. After an hour and a half drive on a shitty dirt road, we arrive in Kabuye, a small village in the middle of nowhere, where we are to start our first outreach clinic. Here we are meant to meet up with a nurse who arrives once a month to vaccinate children. When we ask the locals to point us to the place where they vaccinate, we are shown a few chairs under a tree in the village center. The nurse clearly hasn’t arrived yet (nor will she arrive during the next few hours we spend at the village). Two men who are dressed as if they speak English approach us. A precise estimation – they do. They offer to help and take us to see the relevant personae in the village. Among others we meet the local ‘VHT’ (village health team) volunteer – a woman in her 50s who has some basic training. She conducts health talks in the village about various prevention issues and gives out medications to children when they come down with Malaria or Pneumonia. She shows us an impressive book in which she documents all her activities. We look for a place where we can hold our clinic (since plastic chairs under a tree don’t allow much privacy to the patients). One of the men offers his father’s shop – a 3X2 meter room, where currently 4 people are living. We agree that for a small price, the shop will be cleared on the agreed upon date, chairs and desks will be brought in, and in the shed behind the house we will be able to conduct preventative medicine health talks to the public. All parties are content, medicine boxes are ready, and our outreach clinic will set out in two weeks’ time. 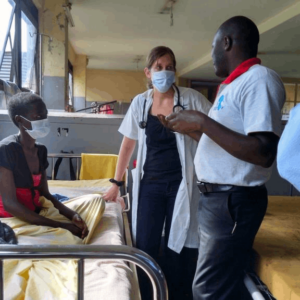 11:00AM. It’s raining cats and dogs. Women’s ward. Not a soul around (apart from many patients of course). Zero out of three nurses assigned for duty came to work this morning. The medicine cabinet is locked. A psychiatric patient is roaming the ward, singing gospel songs at the top of her lungs and hugging any passersby. Eitan comes to the rescue and breaks into the medicine cabinet. We start giving out medications. Close to 12:00PM one of the nurses shows up. No need to apologize. After half an hour of small-talk, she starts working. At 1:30PM she sits down and announces she is tired. A hard day’s work.

All the hospital staff are called in for a routine staff meeting. The meeting opens with a prayer to Jesus (Muslims and Jews are humbly asked to accept Jesus as their lord and savior), and continues with a detailed update from the medical superintendent (MS) about the income from each department’s few private rooms (where paid-for private medicine is provided). To give encouragement to the staff (not to morally encourage them, but to encourage them to make more money), he declares that a third of the income will go towards the ‘staff fund’. The MS gives detailed information about every staff member who received money from the ‘staff fund’, including full disclosure of their personal medical records. He discloses with candor that he himself used the money to buy treatment for his severe sinusitis (…). He continues his update about the hospital’s giant debt to the electric company. But don’t worry; he does not intend to pay it. When they send someone to disconnect electricity at the hospital, he intends to lock the gate and place an armed guard there. The representative won’t be permitted to leave until he reconnects the power. After that follows a polite request to staff members – Please do your best to show up for duty. Not showing up is not good. Also, if you can, try not to leave before your shift is over. Thanks so much. Next comes a short report about Jennifer, the hospital secretary who stole all of the money the hospital canteen brought in. Needless to say Jennifer is still happily employed in the hospital. The meeting adjourns with a vote for the members of the new disciplinary committee. The MS emphasizes that only discreet people, who will not make private matters public, will be elected (…). 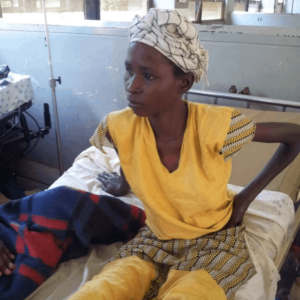 Morning. A familiar face in bed 14. A young woman who we diagnosed with severe heart failure just a few weeks ago. After a tough struggle with her (since she didn’t have money) and the medical superintendent (who wasn’t willing to pay for the ambulance fuel), we managed to send her to the main referral hospital in Kampala, where they have a heart institute and cardiologists, for further tests. She shows us the discharge papers. Apparently she was discharged on the same day. The comprehensive treatment in the Heart Institute boiled down to a single measurement of her blood pressure and a demand for 100$ to conduct further tests (a small fortune, which she obviously doesn’t have), not to mention the cost of treatment. Treatment in government hospitals is supposed to be given for free. A strange kind of free.

Doctor’s rounds. Suddenly we hear gunshots. We look outside the window and see a few guys in yellow shorts (the local prisoner uniform) running. Dr. Josef notes that they are not running fast enough for someone who is trying to get away. Later on we learn that a female prisoner from the nearby prison escaped , took off her uniform, and (with only her panties on) ran through our backyard toward the hills. The rest of the guys were running after her. Word in Kiboga is that an escape boda (motorbike) was waiting for her on the other side. To this day she hasn’t been caught.

Parental responsibility, or why the hell don’t they have welfare services in Uganda 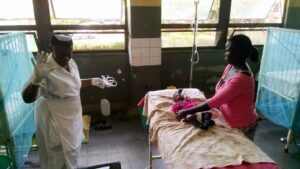 A 3-year old arrives at the hospital, unconscious and convulsing nonstop. He is suffering from AIDS, severe malnutrition, and meningitis (because one illness wasn’t enough). After a thorough history from the mother, we understand that she didn’t take him for treatment or follow-up in an HIV clinic (although the treatment there is provided for free), since she: didn’t know he was sick / lost the notebook / got beaten and chased from the clinic. Needless to say that she herself is on treatment. Grace, the nurse in charge, firmly claims that the mother had separated from her husband and would rather have the kid die so she can find a new man. We start examinations and treatment and give the child a special milk formula for malnourished children, through a nasogastric tube. Since there is not enough staff, the practice is that the parents are responsible for giving the formula to their children. The next day we start suspecting that the mother is drinking the milk herself instead of giving it to the kid. We request that the child be moved closer to the nurse station for supervision. Nurse Grace fiercely refuses. The kid is “dirty”, she claims. After consulting various doctors both in Uganda and Israel, physically threatening the lab and running down to a private pharmacy to buy medications that are missing in the hospital – we get results for half the tests we need, and the child is getting about half the medications he should. Despite all efforts, he continues to deteriorate and dies two days later.

An optimistic note and an Italian strike 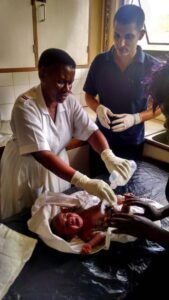 Pediatric ward, the only ward in the hospital that is run like a tight ship by the firm nurse in charge, Iron-Woman Grace. It’s true, she always (always) argues with everything we ask for (or just ignores it), she insists on giving antibiotics to every child who dares to cough a single time, and at every opportunity demands we buy her a chicken… But in her ward, there is regular follow-up on the patients, the medication stock is always full, and the children are getting (almost) all the medications prescribed. When we insist enough and show her proof, she is willing to listen and change habits and protocols. As the queen of preventative medicine, she makes sure every kid is fully vaccinated and doesn’t forget to give everyone a de-worming ‘sweet’. Between patients she gives health talks to the mothers and teaches them how to maintain hygiene and prevent diseases.

This week Grace is furious. The medical superintendent refuses to transfer an irresponsible nurse who doesn’t show up for duty, doesn’t give medications, and according to Grace also breaks doors in her spare time… This will not pass quietly with Grace. She declares an Italian strike and announces she is starting to work only night-shifts from now on. Two days later the medical superintendent caves in, and the deviant nurse is transferred from the ward. The code red is called off and Pediatric ward is back to business as usual. 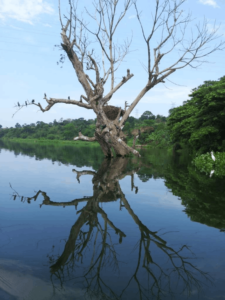 We’re off to see the source of the Nile river in Jinja (where it starts from lake Victoria). We take a boat ride on a newly created lake that was formed after the construction of a large new dam. During the ride we are showered with beautiful birds. Hawks, hummingbirds, ducks, kingfishers, herons and storks. Next we decide to walk through a thick jungle-forest next to Jinja, were see a wide variety of wailing monkeys, and are attacked by a swarm of biting ants. We visit some Chinese and Indian restaurants and are reminded of what food other than ‘matoke’ (a unsweet cooked banana mash – the local’s favorite food) taste like. 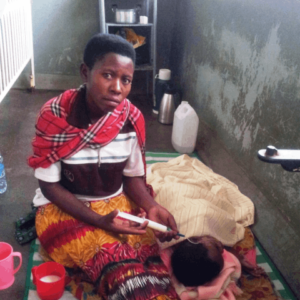 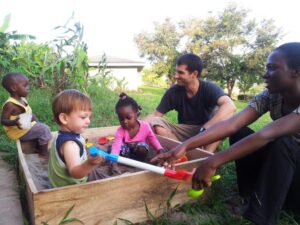 A new beginning in Kiboga

Signup our newsletter to get update information, news & insight